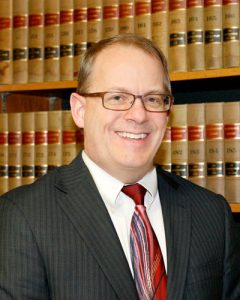 Steven J. Peiffle is a seasoned lawyer with over 35 years of experience. His primary practice areas are municipal law, estate planning and probate, business and corporate law, real estate, and general litigation. Steve has been named a "Super Lawyer" by Washington Law & Politics magazine; the top five percent of the lawyers in the state are named as "Super Lawyers". Steve has also received the AV* Preeminent Peer Review rating by Martindale-Hubbell, the highest rating given.

Steve is admitted to practice before the Washington State Bar, the United States District Court for Western Washington, and the 9th Circuit Court of Appeals. Steve has been very active in local, state and national bar association activities as well. He is the past president of the Snohomish County Bar Association (1992-1993).  In the early years of his practice Steve served on the Washington State Bar Association's Young Lawyers Division (WYLD) Board of Trustees; on the Editorial Advisory Board of the award-winning WYLD publication, De Novo; and was the Chairman of the WYLD's Long Range Planning Committee. He served on the Editorial Advisory Board of the American Bar Association (ABA) publication Barrister. In 1990, Steve was the recipient of the Thomas Neville Pro Bono Award from the WYLD.

Steve stays active by running occasional half marathons, skiing, and is an amateur photographer, hockey fan and geocacher. Born in Waukegan, IL, he still secretly roots for the Chicago Cubs.  He is married and has two adult sons.

For over 65 years, Bailey, Duskin, Peiffle & Martin, PS has been serving the legal needs of Washington clients. Our firm represents individuals, businesses, and municipalities throughout Snohomish County and surrounding Washington counties. Call us for more information.

The office will be closed today for Martin Luther King Day.